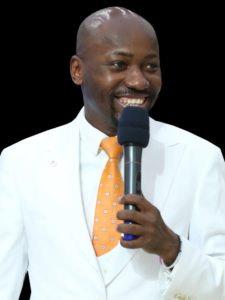 If you ask someone on the street that why they should go to church, you may receive a wide range of answers. Some feel lost, others don’t know the importance, and some may even have a political perspective. The answer is that going to church replenishes the soul in the same way that healthy food powers the body.

Going to church and attending service and prayers allows you to experience the glory of the Lord. It allows you to learn about the great deeds that were made possible by the power of God. Going to church also makes one realize that no matter how troublesome life may appear, there is always light at the end of the tunnel, provided you are under the guidance of God.

To understand the tremendous wisdom present in the Bible, you need a great teacher who can guide you, and help you apply the knowledge in your daily life. That is why you need Apostle Johnson Suleman in Houston TX.

It is believed that some people are predestined for a particular task. Apostle Johnson Suleman of Houston TX is one of them. Apostle Suleman was chosen for this wonderful task even before he came into this world. Just days after he was born, a few prophets came all the way from Warri to Bennin (his place of birth). They told his parents that they had a message from God which said, “A prophet who would minister in God’s presence has been born”. Since his parents were Muslims, they could not accept this possibility.

But what has been decided by the Lord cannot be changed. As Suleman grew, his parents noticed that his behavior was different from theirs. Even when visiting the mosque, he had God in his heart. The first time he encountered Christ was during his secondary education. From then on, there was no looking back. Suleman knew what his destiny was.

He started to go out with his brethren for prayers and evangelical purposes. However, there was something missing, which he received shortly afterwards. On June 20, 1994, Suleman had a revelation in which he was given an image of the globe with Acts 10:38 written on it. When he recovered, he went straight to the scriptures to see what was written. It said: “How God anointed Jesus of Nazareth with the Holy Ghost and with power: who went about doing good and healing all that were oppressed of the devil, for God was with Him.” That is when he knew he had to travel around the world to spread his word.

There is no Hebrew word for “coincidence.” If you are reading this, it is because of the will of God. So, join Omega Fire Ministries to know what the Lord has planned for you and how He wants you to act, behave with others, and improve this world. Join us at 10am on Sunday for our service session. You can also come to the church on Tuesdays at 7pm to attend the wisdom session, which is a Bible study. On Thursdays at 7pm, you can attend our Red-Hot Prayer Service.